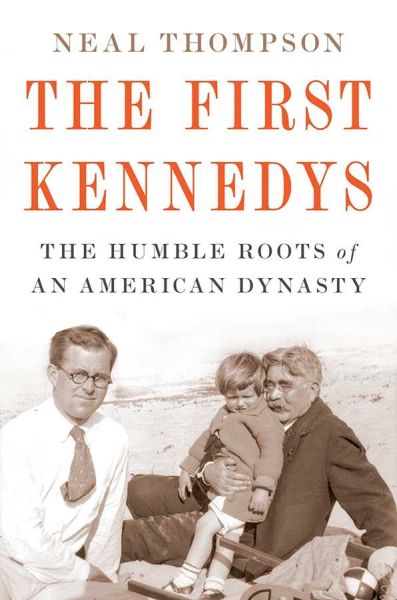 Skip to the beginning of the images gallery
$28.00
In stock

The First Kennedys
The first book to tell the story of the poor Irish refugees who launched the Kennedy dynasty in the United States, The First Kennedys, tells the story of the Irish couple--Patrick and Bridget-who escaped famine in Ireland and arrived in Boston in the late 1840s. Less than a decade after their marriage, Patrick’s sudden death left Bridget to raise their children single-handedly. Her rise from housemaid to shop owner in the face of rampant poverty and discrimination kept her family together, allowing her only son, P.J., to become a successful saloon owner, businessman and, eventually, the first American Kennedy elected to public office.

Reviews:
“Here is that rare thing: an untold chapter in the Kennedy saga. Neal Thompson has given us a compelling and illuminating book about one of the most important families in our history—a family that represents so much about America then. And now.” —Jon Meacham, Pulitzer Prize winner

“Here is the chaos, claustrophobia, tragedy, and triumph of immigrant America told through one city and one iconic family. Just when you thought you knew everything there was to know about the Kennedys, along comes Neal Thompson with this brilliant re-creation of the Irish diaspora succeeding in a city that for many years would not allow them to be part of the American story. It’s great storytelling.” —Timothy Egan, Pulitzer Prize winner and New York Times best-selling author of The Immortal Irishman

“To understand the unforgettable stories of Jack and Bobby, Eunice, Ted, and the rest of their celebrated generation of Kennedys, we have to understand the stories of their extraordinary great-grandparents and grandparents. Now, thanks to Neal Thompson, we can. Read all about it in The First Kennedys.” —Larry Tye, author of Bobby Kennedy: The Making of a Liberal Icon